You are not connected. Please login or register
+2
mattimuss
66ThunderVan
6 posters

Back in the 70's they had a Van run at Beech Bend Campground in Bolling Green Ky. My good friend and I decided to make the trip. The problem was that he couldn't leave until after work on Thursday and the Party started Friday night. So, we packed up and stopped off at our Van club meeting on the way out of town. We left at 8:10 pm and took the most direct route heading East.
My friend, Westside, had a 69 Ford with a 240 and I had my early with a 351. His Van set the pace and he had it to the floor the whole trip. This was pure crazy and I don't think anyone could get away with that kind of speed today, but we were young and dumb and full of it so we put the hammer all the way down.
We both had fresh tunes on our CB's and left them wide open with the squelch off so as to pick up distant bear reports. We did a lot of jawing to keep each other awake and hang with the 18 wheelers to keep up on conditions. The bad news was that they couldn't keep up and even if they could they were on log books and had to stop at all the chicken coups along the way.
Westside liked to drink Coors and back then you could only bring 2 cases across the Mississippi river and it was hard to find back East. We both packed our 2 cases and ole Westside didn't even make it to the river and he gets on the CB and says "hey Bumblebee can you spare some "Colorada Cool Aid". Did I tell you Westside liked to drink. Anyway he was feeling good the whole way. I guess following me kept him in the right direction.
Wow, what a ride! We tore I40 a new one. We only stopped for fuel and 10-100's the whole trip. I don't know how we stayed out of jail but thanks to luck and Truckers we made it and didn't hurt anyone. On Friday we were in Arkansas on this long downhill grade and Westside was able to pick up the pace a little. The road was clear except for a couple of 18 wheelers who weren't talking and we passed them and after we passed I heard the clearest radio ever step in and say " Howboutcha Bumblebee, is that you in that yeller Van with the airplane motor in it?"
Well we pulled into the campground at 1:35 AM Saturday in one piece and got a hand written number for the meet because they ran out of dash plaques. Ours was 2000 + and they said they gave out 5000. What a party! 2000 plus miles in 30 something hours and I'm alive to tell about it. Those were the "Good old days" for sure.
This here's the Bumblebee, I'm 10-10!
mattimuss

Man, does your story bring back good memories from a time gone by!

Thanks for sharing!
Big W

Great story and great memories. Thanks for sharing.
vanny

great story. I love being out on the open road. it almost makes me forget about bills, my job, etc. . .
dan nachel 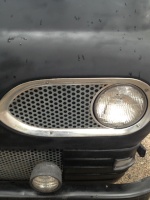 I too was in Boling Green that year. Came down from the Windy City. The club ( midwest vans, Oak Lawn chapter) left out around noon on Thursday, and I didn't finish putting my motor in until 6 p.m. One other friend stayed behind to make sure I made it. Around 3 a.m. he was doing about 90 mph on the shoulder of the road to avoid traffic. (we were the only ones on the road at that time). As best as I can remember, we had a great weekend. SEX, DRUGS AND ROCK N ROLL !!!!!!
Sponsored content