You are not connected. Please login or register
5 posters

Seeking a van between 61 to 67 hopefully near Athens, Tx... Prefer it to be a panel van ... Needs to be close body wise but not as concerned with engine/transmission ... Let me know if there is such a beast available ...
AthensTxMc

If I don't find one I might wind up in an Astro Van or some other EVIL mode of transportation ...
vanny

Congrats Athens! Don't forget to send pics once you've got her in your clutches, PLEASE!

Congrats as well Athens. can't waite to see it.
AthensTxMc

I'll post some pictures here in a day or two ... Still recovering from the trip and trying to make a list of parts and repairs I am going to have to query the good people on here about ... Watch out (=
Big W

Oh Yea!...WELCOME to VV...lol. When we picked up our 66, it was about 3 hours away and we had to load it our selves...made for a long day. Then traveling home at nightfall with the van on the hauler was whole different kind of fun. Highway cops slowing down to see what was on the back. Glad to hear you made it home safe and sound.
AthensTxMc 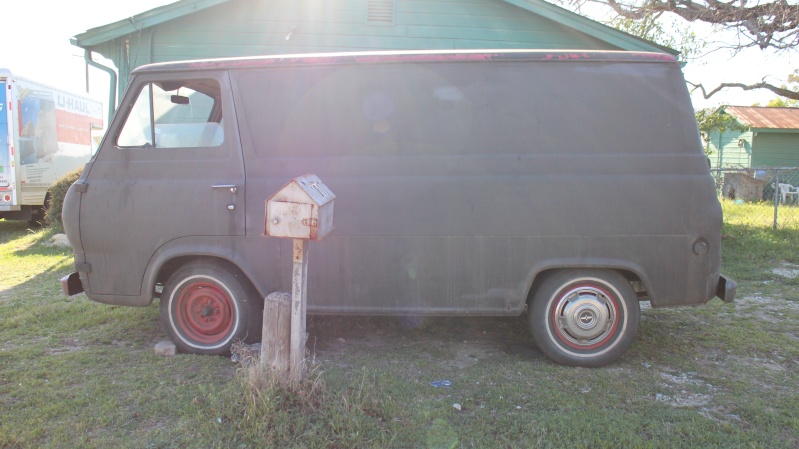 From Kenner Louisiana to Athens Texas ... In the rain and wind and all kinds of nasties ...
vanny

Hot Wheels if I had the Money and did not mind a Divorce you would be shipping that Van to Florida tomorrow.!!!..The Wife said 3 vans is Enough.

Putting a V8 in it now, already swapped out the rear end for a 9" .. I was really lucky on this one, the previous owner put another tank in, had everything rebuilt in the front end etc ,, He couldn't stop the tank from leaking, So I put some hose claps on the filler neck rubber hose that he had never put on,, Amazing how that stopped the leak ..
I put a GM alternator on it and drove it two years before starting the upgrade .. Daily driver ..
Sponsored content